I've been a follower of Project Runway since it's first season on Bravo.  It moved over to Lifetime so that's where I've been watching it ever since.  This week begins the first episode of the season finale, the final installment will be next week.

Following the season finale episode next week, there is the debut of a new series…..Project Accessory!!  I am soooo excited about this, I wish I had thought of this and pitched it to Lifetime :-> 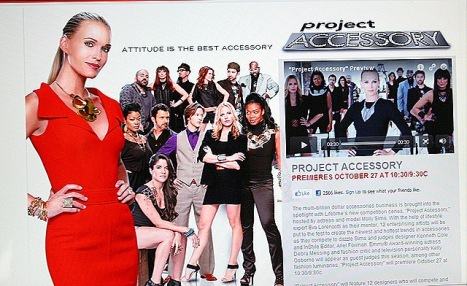 Project Accessory is almost two weeks away, but in the meantime you can watch the HGTV special on the World's Longest Yard Sale.  Titled the Endless Yard Sale 2011 this annual show has returned to a potentially interesting format.  The last few years have seen this show morph into a lame excuse for a decorating contest and a complete waste of my valuable time.

I was happy to voice my opinions about that on my other blog and apparently HGTV heard me loud and clear.  This year the show is again a contest, but a contest to find the best "treasures" at the best prices.  I'm hopeful this year's show will be worth watching.  Tonight at 8pm EST on HGTV.